After a week of impatient waiting our lambs have finally arrived!  The perfect opportunity for plenty of newborn lamb photos! 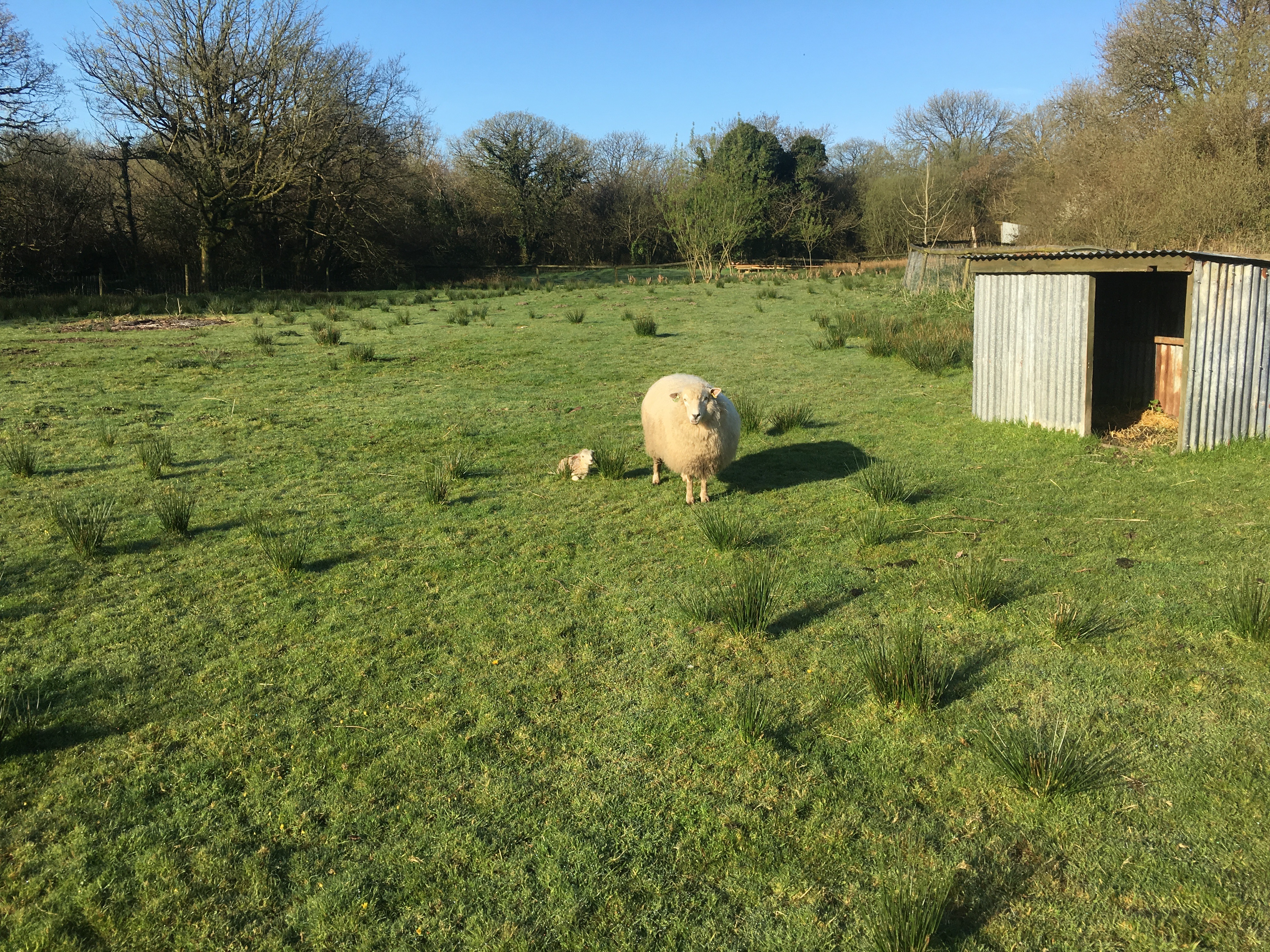 Blondie gave birth to a single lamb early yesterday morning. When I went up to give the pregnant mums their breakfast there she was, standing up by the polytunnel (rather than racing down the field towards me like the others did).   Sitting quietly beside her, looking very content, was a good-sized lamb enjoying the sunshine. I picked up the lamb by its front legs, a ewe lamb, and slowly walked towards the pens set up in the polytunnel. Blondie followed closely, nose to lamb. I laid the lamb in the straw and Mum was straight in there making little maternal bleating noises. I gave Blondie her breakfast and some water to drink and left them to it.

Last year I found that it was helpful to give them some time together, alone. They can still see and hear the other sheep while they bond. I can make sure the lamb is feeding ok and Mum gets some of her own food and hay without having to jostle for it. A mini babymoon (lamb-moon?)

This morning I woke with a real feeling about Trouble. Yesterday she kept going off into the corner of the field but was still eating and chewing her cud happily enough. On my way up the field I fed the ducks and chickens and was pootling about filling water bowls, and I just knew Trouble had lambed. I walked into the sheep paddock and she didn’t run down with the other two Ewes. Full of excitement I walked as steadily as I could (because really I wanted to run I was so excited) and there in the furthest corner, was Trouble, sitting beside two lambs. They had both been licked off and had fed, little full tummies were visible as I picked them up to walk to the pen. They are both ewe lambs.   Last year we had all ram lambs. This year they are all ewe lambs and I am so pleased as these will be additions to my little flock and are my first home-bred Ewes. They will carry my flock number and birth future generations, an awesome prospect.

Trouble has ended up being my favourite Ewe. She is a new Zealand Romney, whereas Blondie and Tufty (I know, rubbish names but it’s all about the top knot of wool) are Kent Romneys. When I went to visit a local Romney breeder’s farm a couple of years ago he’d brought his shearling ewes into a large pen so I could look over their fleeces and choose which I wanted to buy. They were all picked for their wool: the crimp, the lustre, the general gorgeousness of it. Only afterwards did I find out Trouble was a New Zealand Romney, but this was not a problem because her wool was beautiful.

As I didn’t have a trailer at the time, it was a while before they arrived on our patch of land. My famer friend helped me out collecting and delivering them. We were away that weekend and unaware of the imminent arrival. My neighbor who was chicken-sitting at the time rang me up and said “there’s four sheep just arrived in your field!” It was good to know they had finally got here. Three ewes and an unrelated little ram lamb. He was the woolliest, smiliest ram I’ve ever seen and we named him Big Bert.   As it was autumn we left them all together and watched them. They were pretty wild and would run away when we went to see them. Having been used to the security of a big flock it was a big change for them. My farmer friend said to feed them some sheepnuts once a day so they would get used to us. After a few weeks they would stand by the gate shouting for breakfast. Another few weeks and I had them feeding out of my hand in the field. Quite a transformation! 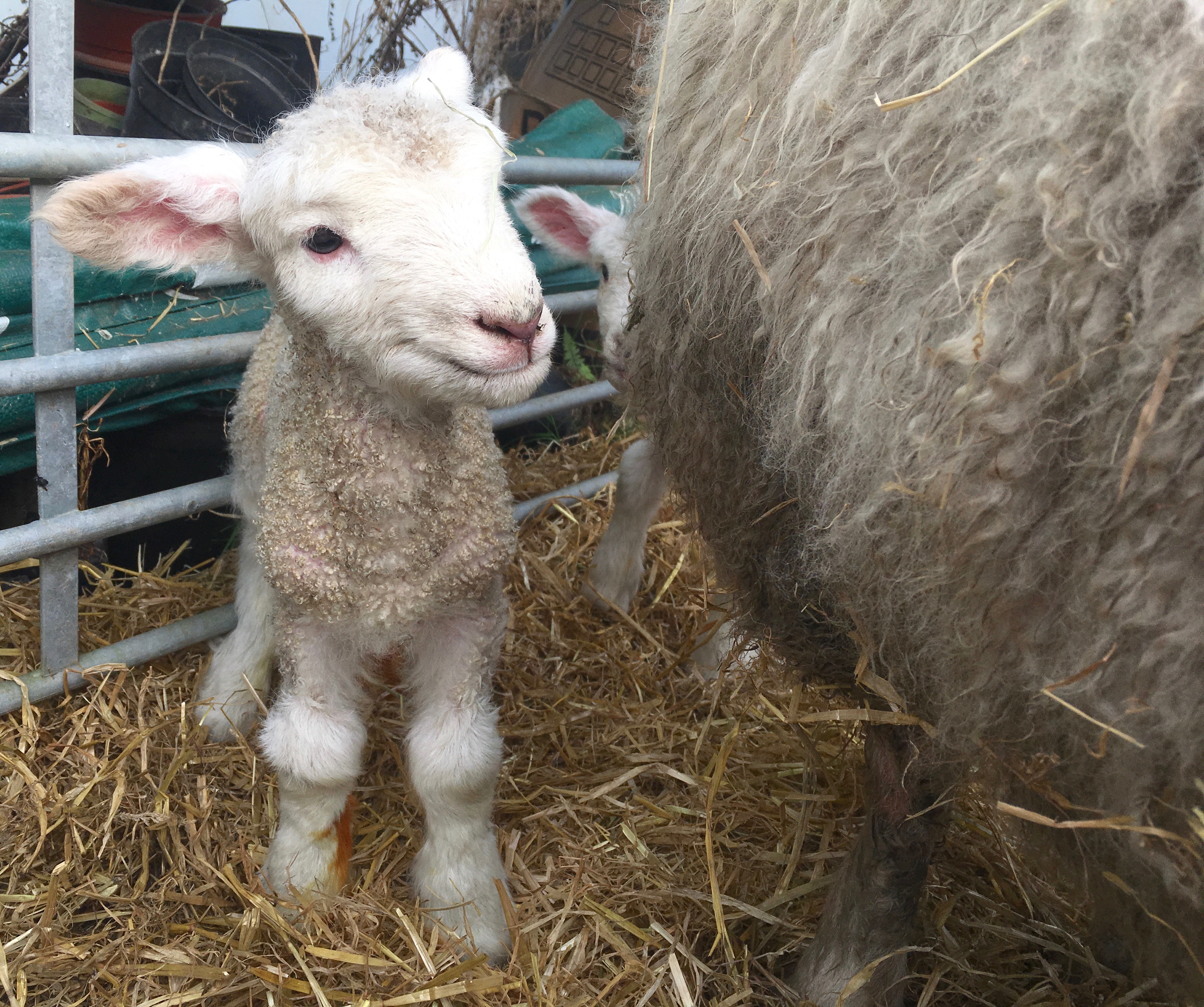 Trouble was named after various escapades. She chose her name really. Firstly she got herself stuck in what had been the pig field. This was a small area that was easily 6 inches deep with sticky mud. The pigs had created a total mudbath before their timely dispatch. Trouble had somehow squeezed herself though a non-gap to get into the mud. There was no grass in there so, like you, I found myself wondering why she would do that. She got properly stuck and had to be rescued. It was about that time that my farmer friend told me that the only happy sheep is a dead sheep. Wise words. 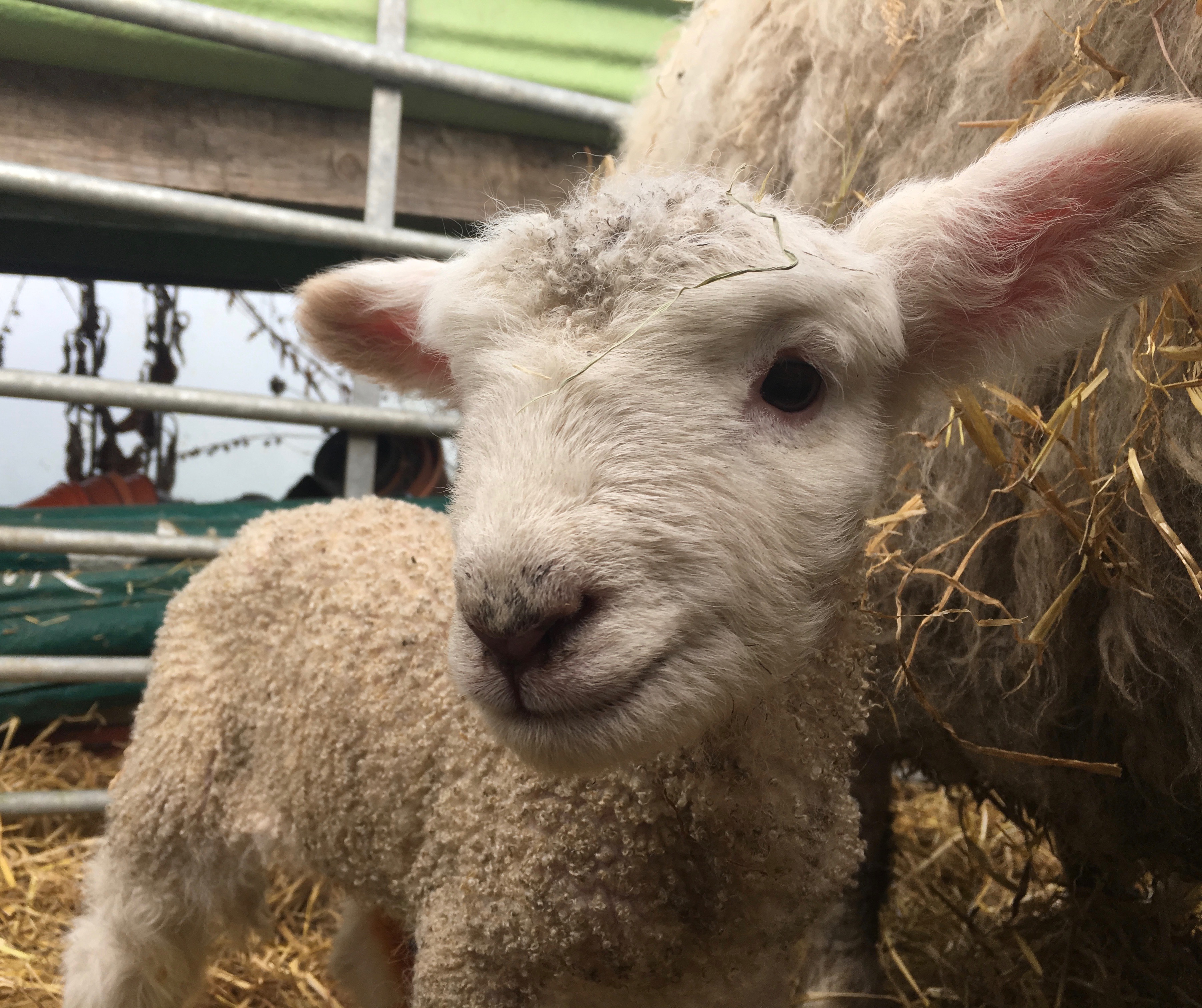 Trouble was clearly seeking that particular kind of happiness because her next major life event was getting tangled in some electric fencing wire. Fortunately it was switched off but had been left fixed taughtly in place to protect a new hedge we’d planted. A night of heavy wind had loosened the wire and the first we knew was the next morning when I went into the field. Bert was standing beside Trouble who was lying down. From where I stood she appeared to have achieved her dream of eternal happiness. Then she wriggled and I saw the problem. I don’t think I could have tangled anything as badly as she had tangled her feet. Three feet were caught up in the wire, some wrapped multiple times with a few loops around her neck for good measure. It was impossible to unravel and in the end I had to cut the electric fence wire. I gave her some arnica and some rescue remedy and stood back to watch as she heaved herself to her feet. She was pretty stiff and looked like she had pins and needles: quite a strange sight to see, that. After a while it was clear that she had damaged the tendons on one of her front feet. Sheep have very flexible tendons so she was able to walk on the front of her foot (imagine walking on your wrist). It made my eyes water to see it and I rang my famer friend who came over picked her up with herculean strength and we took her to the vet.

The vet was happy that nothing was broken and was intimating that most farmers would cull an animal damaged in this way. As Trouble represented a third of my breeding ewes that wasn’t really an option. After discussion, the vet strapped up Trouble’s ankle and gave us some vetwrap and painkillers.   We took her to my farmer friend’s barn where she could be out of the mud and not racing around and over the next six weeks he, and a friend and I changed her bandage every few days. I searched online and was unable to find any anecdotal evidence to suggest how we could help her, adding weight to the vet’s ‘culling’ statement. Clearly commercial famers didn’t bother with this kind of thing. We put a splint on either side of her foot to hold it straight, not sure whether it would help or not, but over time she started weight bearing on it. Eventually we removed the splint, and then slowly reduced the strapping. Holding our breath we watched as she tentatively walked without a bandage. Her ankle was definitely stiff at first, but it seemed that against all the odds, she had recovered. She stood high on her pastern with a beautifully shaped leg and as the ground had dried out a bit, I took her back home. The others were pleased to see her and they ran around together for a while.

A month or two later the sheep-scannerman came to our area. A rabble of people with various small flocks gathered together at the farmer friend’s barn and watched as the scannerman scanned the ewes bellies. Think of the early baby-scanning machines and you are about right with the image quality. But this man can interpret the results down to how many days pregnant the ewes are along with how many lambs the are carrying. Or if they are ‘empty”. That time, it turned out Trouble was carrying twins! In spite of the stress of her sore foot and being handled and bandaged, she had held on to that first pregnancy. I was amazed. She produced two strong ram lambs last spring and then twin ewes this spring. She’s calm and steady and friendly, curious and cheeky but not flighty and not aggressive. Sheep really do have different character traits and they are much cleverer than they like to let on. Most of the time…..