Early in April, the Royal Cornwall Show becomes the subject of keen discussion locally. The show is in the first week of June every year and while entries open in April, planning and preparations start much earlier, as much as a year ahead.  This year, encouraged by my farmer friend, I decided to have a go and enter the Fleece Competition with a fleece from one of my Romneys.

I went to the show for the first time last year. I have always had a child so small it seemed a little overwhelming to go somewhere so large – visiting the local shows was enough of a challenge. However, last year we all felt ready to tackle the enormity of RCS. It really is huge: the showground covers 230 acres. People come from all over the country to show their prized Bull, Heifer, Ram or Ewe; their rare breeds and the commercial breeds. Along with the sheep and cows there are goats, pigs and horses, a steam fair, a huge floral display tent, tractors old and new (you can even climb on some of them), enormous combine harvesters, milking parlour equipment, stalls of food made by local producers local tradespeople, schools, charities, the Real Ale Campaign ….. you name it, there’s a pretty good chance you will find it here.

Last June I fell in love with the sheep tent. This picture is from the end of the show when people were packing up – but you can imagine its full of sheep and people and you can, if you try really hard, maybe even hear and smell it?!

It’s a really large marquee, full of pens, strawed up and housing little collections of various breeds of sheep. You can walk between the pens and talk to the breeders, many of whom rely on exposure at the show to put them in touch with prospective buyers.

Somehow in that first visit I managed not to come across the fleece tent – an omission which I spent many hours kicking myself for this year. What exactly were the Judges looking for? How should I present the fleece? Were there any examples online? (surprisingly few). By the time I reached this point of questioning it was too late. I had already entered not one, but two fleeces. Two! Well, the entry fees for two meant I would get a free day pass to the show – not to be sniffed at!

I started ringing the shearers in early May to get booked in shortly before the June show date, but allowing me enough time to prepare the fleeces.   After many phone calls (shearing is a rolling day-to-day activity and its hard to pin down a date until close to the time) I eventually had a date. A few weeks of trying to pick out bits of shrubbery from the wool while they ate their post-lambing feed helped establish which fleeces were the most likely candidates.

Once sheared, there was some serious work to be done. The fleeces needed to be skirted (removing the belly wool and shoddy mucky edges) and picked over to remove bits of grass, dead beetles, hay, and various oddments. I spent about 5 hours on each fleece, went cross-eyed and started dreaming about picking through wool! I was worried that I was just out of my depth. 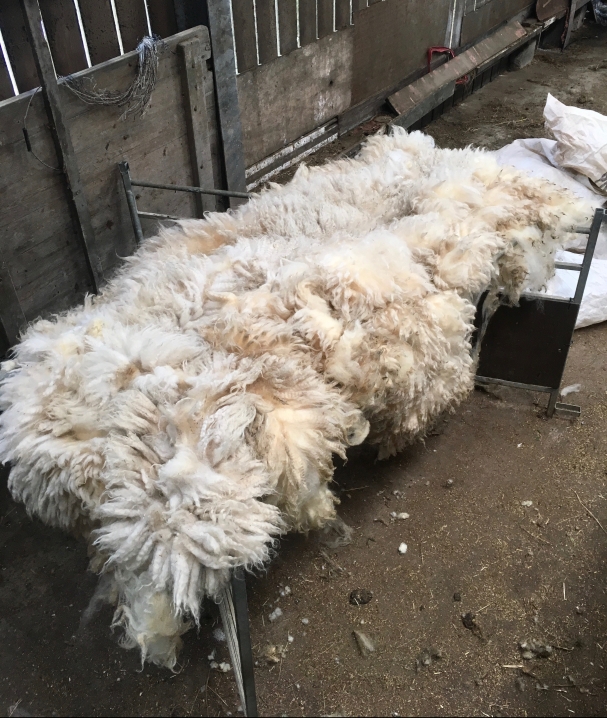 But when I took them to the show tent the day before the show started, I could see some of the other entries and I relaxed a bit. It looked as though I had, kind of, got it right.

Judging on the first day of the show seemed to take forever. The tent is closed so you can’t really see what’s happening inside.  I hung around watching the sheep being shown, keeping half an eye on the fleece tent doorway.  When they opened up the tent I couldn’t quite believe my eyes…….here was a yellow ribbon on top of one of my fleeces.

Bert the Ram’s fleece had won third prize in its class!

The judges add some feedback to the entry card, marking various aspects of the fleece as excellent, good or poor, and sometimes some helpful comments on the bottom.

Of course, having spent two weeks determined never to do this again, I have now got the bug, and am looking to see how I can improve my fleeces for next year!