I know… you want to know if we made it in before Christmas….. You’ll have to read on, I’m not giving it away yet….

There is nothing as daft as a self-imposed deadline with Santa and children depending on it all falling into place.  That night, after we’d got the yurt up in the dark, it rained. Oh how lucky we had been able to put it up in time before the base got wet again.

On the morning of December 20th, Naomi came to help me put the wool liners up. “We’ll have to take the canvas off first” she said, casually, eyeing the sky briefly. It was dry but there were ominous clouds around. We set to it. Naomi knew exactly what to do and I now have a much better understanding of how the canvas pieces fold and line up to make the whole set-up easier. We worked hard and fast, putting the wool liners directly onto the frame. Short of hands, I grabbed my eldest to hold the liners in place while we replaced the canvas roof cover and Naomi held it from the top, holding one half in place and pulling the other half of the circle across while I worked across from the ground. 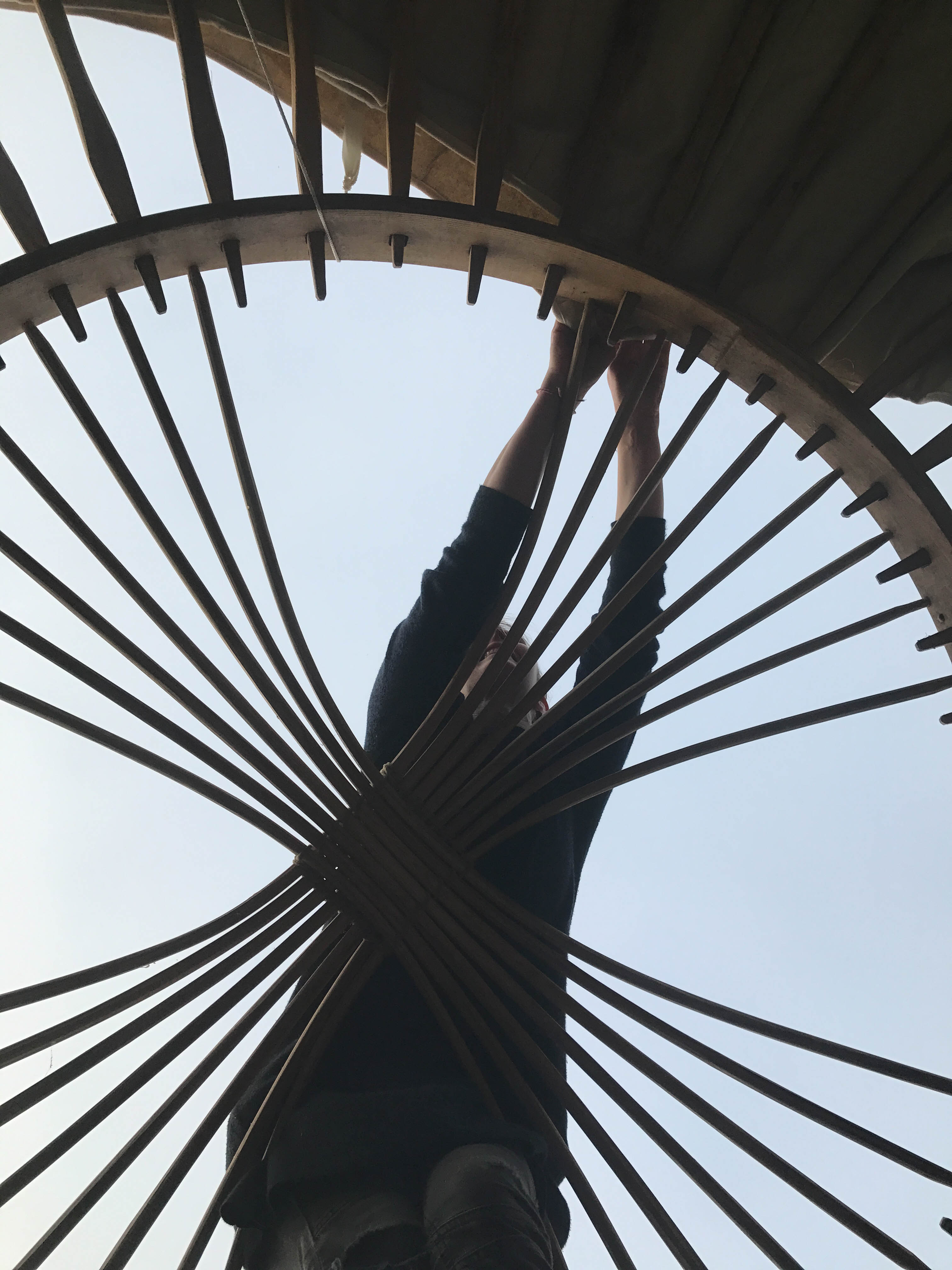 Then we put the wall liners in place, a wonderful warm yellow serge which needed some tucking inside the lip of the base.

Already it was feeling cosier and so much lighter inside. We got the canvas walls on and made it watertight just before the mizzle began again.

The challenge on the 23rd was to get the flue and stove installed.   We needed to get some heat into the space to dry out the floor ready for carpet-laying. Gigman and the band were playing all sorts of lovely Christmas gigs but it meant he wasn’t around for a good chunk of the day. My farmer friend came to help – between us we managed to install the flue, cut through the canvas (fairly terrifying) and, with the help of the tractor bucket, get a supporting pole into the ground to attach the flue to. By dusk we had the woodburner going inside the yurt, along with dehumidifier on full blast. 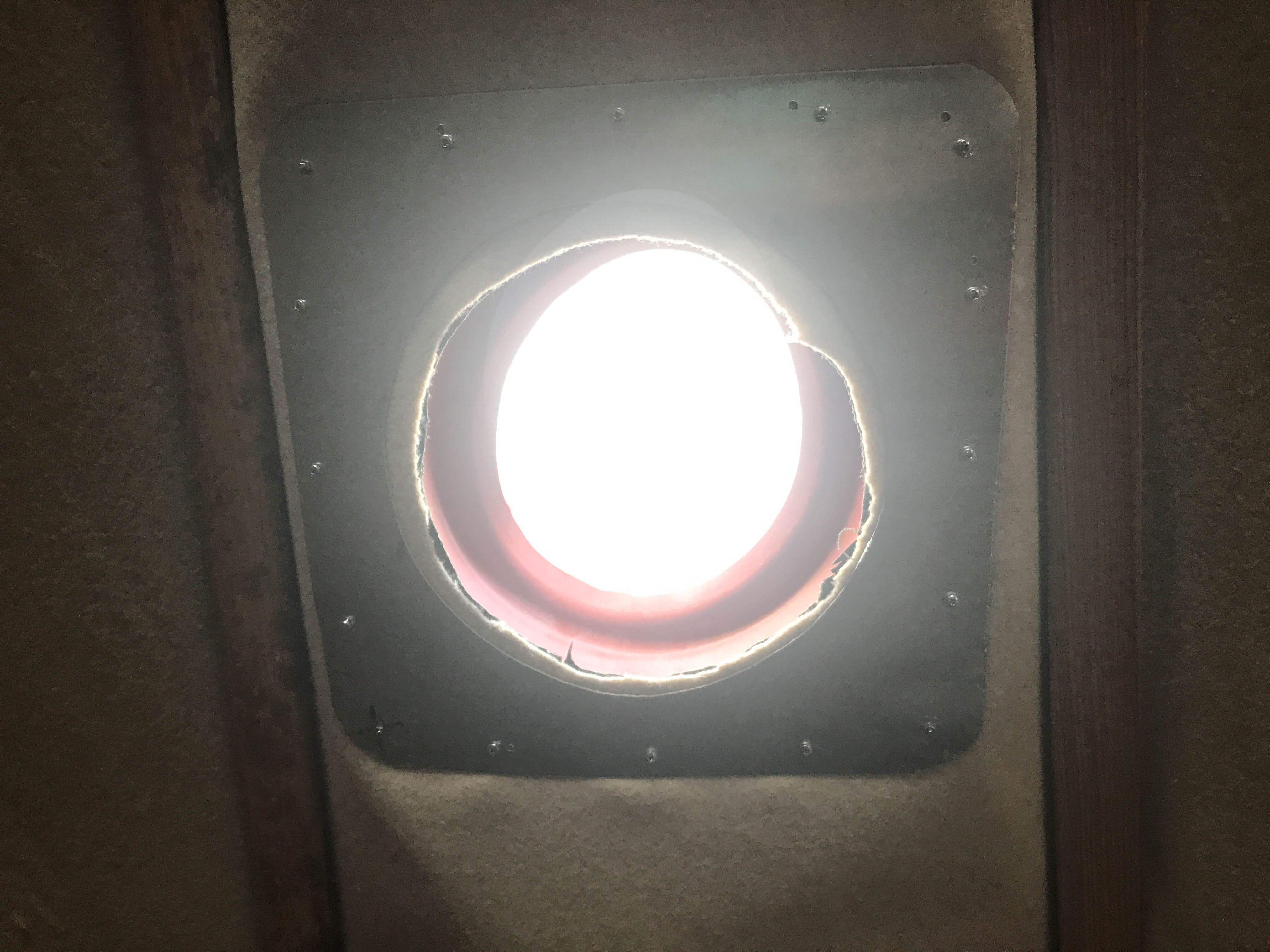 Finally, Christmas eve. Oh that deadline……. I woke in the early hours and got up at first light.

The silver insulation I’d measured out last week was still holding together and ready to lay on the base.   The underlay had provided a home for a little visitor who had munched himself a nice little nest space. Gigman cut the chewed patch out and replaced it while it was unrolled in the shed. Cutting the carpet was really hard – it was so heavy to move around and we knew if we cut it wrong it would be an expesive mistake. Gigman and I were both exhausted and the children were hopping up and down asking about when we would be getting a Christmas tree……

After a quick discussion, Gigman and the kids went Christmas tree shopping. They came back with a perfectly sized tree to fit in the yurt, a complete bargain at fifteen quid! My farmer friend arrived with his usual perfect timing (like the shopkeeper in Mr Benn) for a job that needs more than four hands, and the three of us got the foil layer, the underlay and finally the carpet laid, jiggling the stove in and out and setting a slate hearth on top of the carpet.

Time was pressing on,,,,, tree decorations were found, sleeping bags and pillows were located, the tree was fixed onto the stand and brought in to the yurt and the Very Important christmas stockings were found. Meanwhile I trimmed around the carpet to make it fit inside the base tidily. There has to be a better tool for that job than the kitchen scissors but that’s all I had (I had scissor bruises the next day!)

Finally, finally, we got the kids snuggled into their camping beds in the yurt, stove blazing and they fell asleep watching as we decorated the tree.

And guess who came to visit that night while we were all asleep!

So despite the weather, the logistics and the timescale, we made it in to the yurt in time for Christmas! Nothing short of a miracle and only possible due to the fact we have some amazingly supportive, strong and helpful friends.  We are so very grateful.